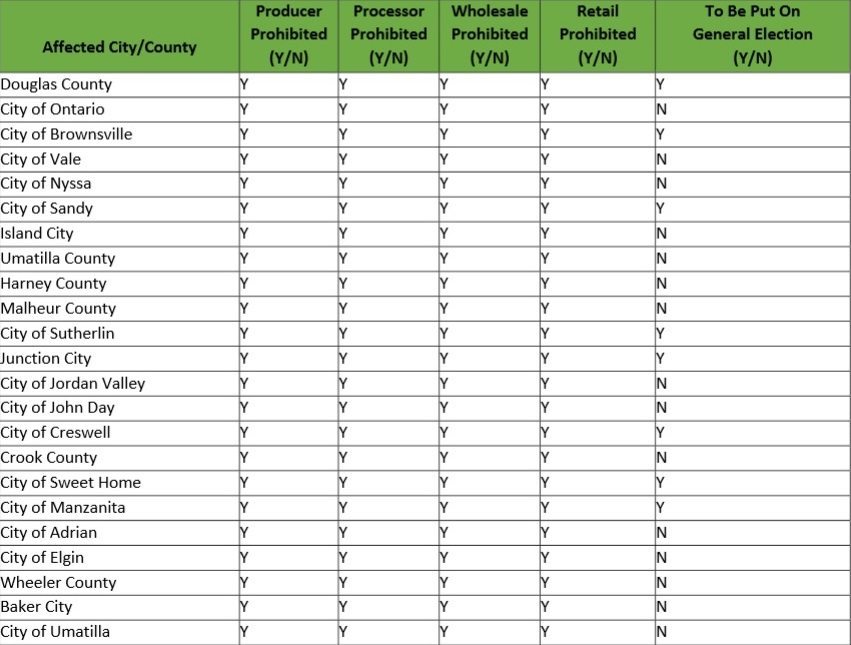 Six counties and 17 cities in the state of Oregon are currently deciding to Prohibit Licensed Recreational Marijuana Facilities. That’s the list today, but sadly it seems to be growing by the week. By refusing to recognize the benefits of cannabis, or at least the benefits of doing away with prohibition, these local governments are not doing themselves any favors. For example, according to the Associate Press:

A marijuana tax for schools in Colorado raised more in the first five months in 2015 than it did for all of 2014.

Oregon is near the bottom in the nation for school funding, and there is no reason we should be denying our education system these vital tax dollars. If they’d like their communities to be safer and better-funded, these local politicians would reconsider banning the legal pot market and the best of the legal marijuana clones for sale providers. The Denver Post reported in June:

A record 71.3 million visitors spent $18.6 billion in Colorado in 2014, marking a high point for the state’s thriving tourism industry.

A few weeks ago, I signed up for email updates from the State of Oregon Liquor Control Commission about the progress being made on implementing Measure 91, Oregon’s legal marijuana law. The OLCC is in charge of the creating the specifics of the new law and sends out messages to those who want to know about about upcoming meetings, new decisions, and things of that nature.

I was hoping the emails would be informative, and show signs of good progress, but to my disappointment the most frequent update I’ve received so far goes like this:

The Oregon Liquor Control Commission has updated the list of Oregon cities and counties which have prohibited the establishment of licensed recreational marijuana producers, processors, wholesalers, and/or retailers.

If you haven’t already guessed… the update is never that one of the cities or counties has been taken off the list. No no. It’s constantly getting updated because more cities and counties are going on the list.

Here’s a look at it currently:

These localities are not only doing what they can to limit progress, but they’re forcing tax dollars out of their local economy. The governing bodies who are making this choice are not acting in their community’s best interest. Even more disappointing are the cities and counties who are not even going to put this issue to a public vote.

Marijuana is legal in the state of Oregon now. People are going to consume marijuana, just like many people consume alcohol. It’s actually safer than alcohol, so if if your city has bars and liquor stores it’s very hypocritical to find legal weed offensive.

If the legal marijuana market is banned from a particular city or county, people are just going to leave the area to buy legal weed somewhere else. Alternatively, they could also just stay at home and keep purchasing it on the black market like they likely already have been.

I hope that once marijuana has been legalized in more states, and once more people see the many benefits of ending prohibition, these cities and counties will eventually come around. In fact, I plan to do what I can to change their minds. I truly believe if they listened to the facts, rather than relying on out-dated and unscientific opinions, lawmakers would be fighting to bring legal marijuana to their community, not keep it out.

14 THOUGHTS ON “WHY I’M SHARING MY STORY”

33 THOUGHTS ON “MORE ABOUT ME”

THE FIRST TIME I BOUGHT LEGAL MARIJUANA IN OREGON