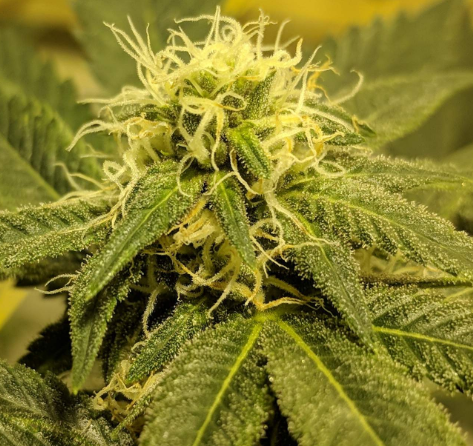 The West Coast Sour Diesel OG is genuinely a strain of the eastern coast more than anything else.  With a strong stench of Diesel fuel fumes, the cannabis strain is heavily Sativa dominant and with a 70% strain dominance.  The dark green color is interspaced with trichomes and is somewhat dense to the touch.  This would make it hard to light up and more so on a very windy day or at the beach.

A lot of regular users would claim the West Coast Sour Diesel OG to be one of the most potent of strains to be had for the money spent. The action first hits the top of the head to be followed by a slow descent that reaches out to the feet in time.  Often there is a heaviness associated with the use of the West Coast strain and it takes a real connoisseur to appreciate the plain goodness in the smoke at any time.

It must be said of this particular strain of cannabis  that it is one of the most recent ones to have hit the market.  This is also an excellent reason to have people try out the combination of clones for sale for the very first time as well.  There have been some instances of users feeling a bit giddy after the first experience, and it would be best to spend some time before any effort at making a move is attempted.

The application of the cannabis to therapeutic uses and applications have been in use only in the very recent past.  This must be attributed to the lack of awareness of the product and some extent the negative image of the produce.  However, of late, there has been a firm reliance on marketing techniques to penetrate the market better as has been amply seen with the increased awareness and use of the medicinal cannabis.

As has been demonstrated, there have been some compelling ways cannabis has been unleashed on the medical conditions.  The most promising aspect of the use of the cannabis medically has been the dramatic turnaround of the person’s health at the first use of the marijuana.

It is not as though the cannabis can only be used to handle the written off cases.  Increasingly, it has been put to good use to control certain conditions and to bring about a better and cost-effective treatment forms.

-Headaches.  Not all headaches are the same.  Some are so extreme that they are more like splitting the head apart.  Just the smallest whiff of the cannabis smoke stream is sufficient to bring not only relief but a better-managed condition at best.

-Nausea. There are a number of folks that have problems while traveling around.  The most common conditions are the motion sickness and vomiting that are associated with motion or travel.  Just a small use of the medicinal cannabis is sufficient to drive away the strongest of dizziness in people and on the most violent of transports.

-Hyperactivity. Most people change their activity levels depending on the occasions.  However, some people tend to get so worked up that it becomes difficult to make informed decisions or actions.  Medicinal cannabis has been effective in controlling hyperactivity to no small extent, but like most herbal applications, the actual result and efficacy of the product can vary in each instance.  Thus it is best to treat each individual on a case to case basis.

-Depression.  It is a defining characteristic of medicinal cannabis to affect the moods of the individual.  However, each situation differs, and the actual state of the person does change how well the treatment form works in effect.

The very results of the use of medicinal cannabis are very different as compared to the initial state of the person concerned.  Here the experience of the person treating a person using the cannabis is essential as the very nature of the product is somewhat subjective too.  However, this should not prevent the more significant use of the marijuana if the results can justify the means.